The Proper Pit Bull
What is a Poster Pit?

A Poster Pit is really a Poster Pit Team! It features a pit bull or pit bull mix ambassador that exemplifies what a poster pit bull can be and what a proper pit bull can do with training, but it also absolutely includes a handler who exhibited a commitment to training and responsible dog ownership.

Our Poster Pits are an integral part of TPPB. They are the faces of our organization and examples of what pit bulls can do and become with committed owners and quality training.

They are dogs who have earned a CGC, BA, are registered as a Therapy Dog team or have achieved other approved qualifications.

To become a Poster Pit Team:

To qualify to become a Poster Pit Team, your dog must be one year of age and must have achieved one of the aforementioned qualifications. Additionally, human handlers must volunteer for at least one event prior to evaluation.

If you would like further information on becoming a Poster Pit Team, please contact the Poster Pit Manager,  lindsey.dibattista@theproperpitbull.org for details. 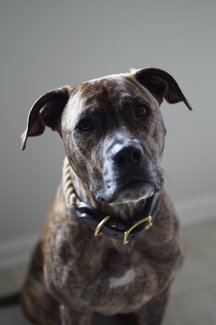 Brick
Brick was adopted with the help of PetFinder from a small rescue near State College, PA called A Darrah Bull Bully Rescue in July 2014 at 8 weeks old. He quickly became loved and was transitioned to a city dog in Pittsburgh by his parents Matt and Alexandra Andromalos. He began his training at Camp Bow Wow Highland Park with his advanced level training and continued training at WPHS. He earned his Canine Good Citizenship certification in April of 2017 and is currently working on his Therapy Dog International training and certification. His favorite things include napping on his LoveSac, chasing tennis balls, going to camp at Camp Bow Wow and attending any dog friendly events to meet new friends and enjoy the atmosphere. 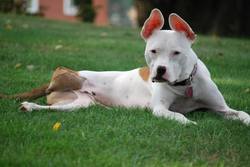 Penni
Penni was adopted from the Western PA Humane Society by her foster parents Lori and Mike Stadelman.  Penni had to have her leg amputated at 4 months of age but that has not slowed her down.  Penni has earned her PhD in Canine Life and Social Skills and her CGC certification. Penni  has a furry brother that she enjoys going for walks, laying in the sun or just cuddling on the couch (her favorite) with. 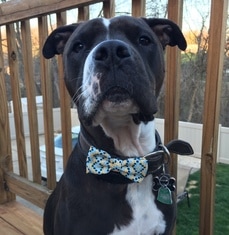 Waylon
Waylon was adopted from the Animal Rescue League in March of 2014 at only 4 months old.  His mom and dad only went to look that day and ended up adopting him on the spot. Waylon excelled at his obedience classes starting off with puppy basics then on to earning his Canine Good Citizen at 11 months old. Waylon also passed his Therapy Dog International test at a little over 1 year old, but after a few visits he showed his mom that it really wasn't his favorite line of work so Waylon went back to school and attended the Canine Life and Social Skills classes at the Western Pennsylvania Humane Society earning his PhD! Waylon and his mom will now be focusing on getting involved in the exciting world of Rally-O and Disc.

Some of Waylon's most favorite things to do are going to Camp Bow Wow to play with all of his boyfriends and girlfriends, making any new dog friend that he can find, being a very large lap dog, hanging out with his bestest bull-buddy and changing the hearts and minds of everyone he meets. 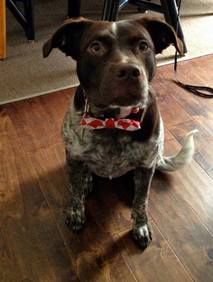 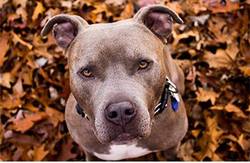 Odin
Odin was adopted from the Western PA Humane Society in December of 2014 at the age of two by Jess Pollis, a first time dog mom. Odin and his mom jumped right into obedience class to learn about good manners and to meet new friends. Six months into obedience school, Odin earned his Canine Good Citizen and is working to become a Certified Therapy Dog. He has most recently earned his Master's Degree in Canine Life and Social Skills at the WPHS. Odin and his mom love to volunteer at events and are always excited to meet new people. Odin is very loving and enjoys a good belly rub, he is sure to put a smile on your face and most likely a kiss. Odin is best at happily wagging his tail and showing everyone how kind and gentle a Proper Pit Bull can be! Stop by The Proper Pit Bull tent at our events to meet Odin and his mom!

Roxi
Roxi was adopted through Animal Rescue League in Aug 2008 at 3 months old. She was a little feisty and returned to the shelter. Her mom and dad came adopted her a few days later. She is now 5 years old, and newly titled novice trick dog. She is practicing her tricks and working towards her CGC. She loves car rides, cuddling and laying on her hammock.

Stella
Stella was adopted from Animal Friends on July 31st 2018 at 2 months old. She was one of seven in her litter along with her mom who were available for adoption, known as Sundae and the Ice Cream puppies. She began her training at WPHS and went on to earn her Canine Good Citizen certification at 9 months old. Loving to learn or maybe just loving all of the treats she continued her education and became a certified therapy dog (TDI) on July 12th 2019. Some of Stella’s favorite things are keeping in touch with her siblings, rides in the car, playing with the hose, visiting her next door neighbors and taking long naps in the sunshine.....oh and her signature color is raspberry!